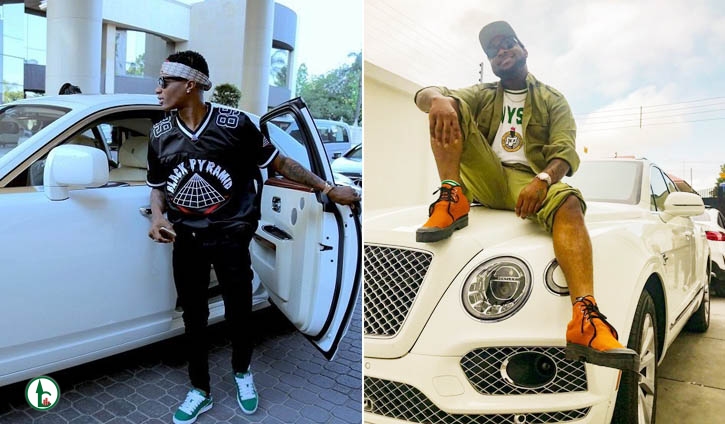 Who is the richest between Davido and Wizkid in 2021? Wizkid and Davido are currently the two hottest musicians out of Nigeria, taking up the international scene. These two artists for over a decade have continued to entertain their numerous fans across Nigeria, Africa, and globally with songs, and a lot of times it seems like the two young men are in a tight competition, but they have attested that they are not. Regardless, Davido and Wizkid’s fans continue to engage in numerous social media fights on who is better, more talented, and even richer.

Ayodeji Ibrahim Balogun (Wizkid) started out as a Musician in 2009 with Empire Mates Entertainment, and he is currently one of the biggest stars in Africa. While David Adeleke began his music career in 2011 under his brother’s record label called HKN music, and the two young men have consistently topped the African music charts over the years. These two young men have attained the same heights of success, maybe not through the same platforms, but they command a large fan base.

To get a clear insight into who the richer person is, it would be fair to compare their net worth, brand ambassadorships, cars, and houses. Let us have a look at Davido’s net worth before proceeding to check Wizkid’s net worth.

He is not only a Musician, he is the son of one of Nigeria’s richest men – Dr. Adedeji Adeleke. But, Davido became a household name as a Musician in 2011 when he released his first single called Back When. Since 2011, he has become a force to reckon with in the Nigerian entertainment scene.

According to Forbes Magazine, Davido has an estimated net worth of $18 million. His riches over the years have been acquired mostly from his time as a Musician, and even on his YouTube page, he has over 663 million views on his videos.

He owns three mansions home and abroad, in Lekki and Banana Island, Lagos worth N140 million, and the other in Atlanta, USA.

According to some reports in Nigeria, Wizkid has the largest fan club but can a celebrity’s fan club be measured by social media shenanigans?

Wizkid started singing as a choir member when he was a teenager, and since then his passion to pursue his music career has not dwindled. Wizkid has an estimated net worth of $20 million dollars, and he is not backing down. He is a brand ambassador to many some Nigerian and International brands.

He signed some endorsement deals for Telecommunication companies like MTN and Glo networks, which secured him N120 million in the bag. He is also a brand ambassador for Pepsi alongside celebrities like Tiwa Savage, Dj Cuppy, Burna Boy, Alex Iwobi, and others, he earned $350,000. In 2019, he also became a brand ambassador for one of Africa’s finest banks, the United Bank of Africa. For international brands, he has an endorsement deal with Sony, Ciroc, Nike, Dolce, and Gabanna.

In 2018, he walked alongside Naomi Campbell at a fashion show in Milan and he was reportedly paid $20,000 by Dolce and Gabanna. For Nike, he posed in a tracksuit created for the Nigerian Super Eagles official Jersey which was used at the 2018 world cup in Russia and this deal was worth $3.75 million.

Wizkid charges more than N10 million for a show in Nigeria.  He has a house worth N13 million in Surulere, Lagos, and another house in Lekki, Lagos worth N68 million. He reportedly has a house located in Los Angeles also. Some of the cars he owns are Porsche Panamera, Hyundai Sonata, A Bentley, A Lamborghini Prime, and many other luxury cars.

From the calculated net worth presented in this article, it would be right to say that Wizkid is richer, but you cannot say who is actually richer in reality. The two young men though in the same industry perform at several shows, release different songs and have their own personal businesses. It is impossible to say for a fact who the richer person is because as the year goes on, one may surpass the other at shows, and vice versa. For now, they are inspirations to many youths looking to carve a niche in the entertainment industry.

For this year Wizkid is $2 million richer than Davido.