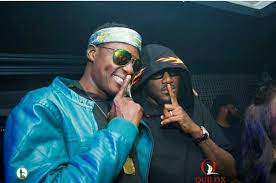 Legendary Nigerian singer, 2face Idibia has paid a visit to his late friend and colleague, Sound Sultan’s grave in the US where he was buried.

It could be recalled that the deceased singer died after a hard fought battle with Angioimmunoblastic T-cell Lymphoma,a rare form of non-Hodgkin lymphoma, which is a group of related malignancies (cancers) that affect the lymphatic system (lymphomas).

In a layman language, Sound Sultan died of Throat cancer on Sunday 11 July, 2021. He was buried the next day in Brooklyn, New York in the United States.

Months after his death, popular singer and close friend of late Sultan, 2baba, paid a visit to the singer’s grave.

“WENT TO PAY MY RESPECT TO MY BROTHER SOUND SULTAN. WITH MY BROTHERS @EMMAUGOLEE @AMFRANKIEJ @BLACKAHRANK. WE MISS YOU MY DEAR FRIEND.”

Watch the video below;