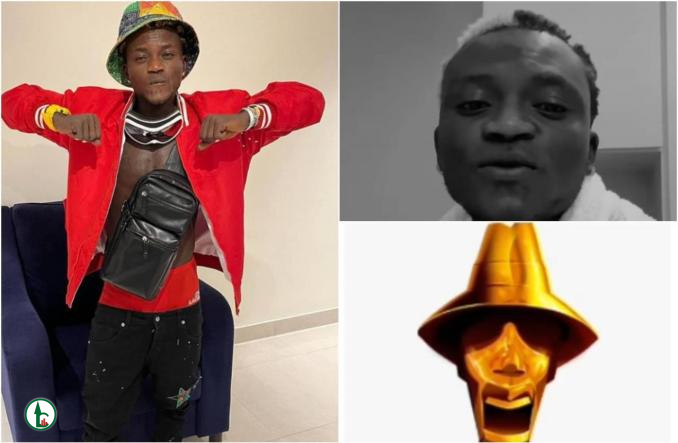 Fast-rising singer, Habeeb Okikiola popularly known as Portable has tendered an unreserved apology to the organisers of the Headies Award.

The singer who has been nominated in two categories at the Headies had earlier taken to his Instagram page to threaten to beat up his co-nominees who clinches an award.

Portable was nominated to contest for ‘Rookie of the Year’ and ‘Best Street-Hop Artiste’ categories when the Headies unveiled the nominees for its 2022 edition on Tuesday, May 24th.

Portable is in competition with AV, Fave, Magixx and Ugocci for Rookie of the Year.

For Best Street-Hop artiste, he has Bella Shmurda, Mohbad, Naira Marley, and Goya Menor to contend with.

In a video which went viral, Portable threatened the life of his opponent who wins the award over him.

He vowed to kill whoever wins the award over him.

Hours after his post, Headies threatened to disqualify him if he doesn’t retract his statement.

The body stated that it doesn’t condone or accept such behaviour and as such he should be disregarded.

The Headies also revealed that the Police have been alerted should anything go wrong.

The award boy called for him to retract his statement and tender a written apology to nominees in both categories or risk losing his award.

“Should Mr Okikiola fail to meet our demands, we will not only disqualify him from participating in The Headies but also enforce the instrumentality of the law.

The general public are hereby implored to disregard the video and stop the dissemination of the same in the public space,” The Headies noted.

Portable has retracted his statement.

The singer took to his Instagram page to tender an apology to the organisers and his nominees.

He stated that he was only joking and catching cruises and meant no harm to anyone.

Nollygistvibes recalls Portable had vowed to be bigger than an award-winning singer, Wizkid.

The ‘Zazoo Zeh’ crooner told Nigerians to give him two years as he would be bigger than the Grammy winner.

Taking to his Twitter page, he wrote, “Give me 2 years, I’ll be bigger than Wizkid”.