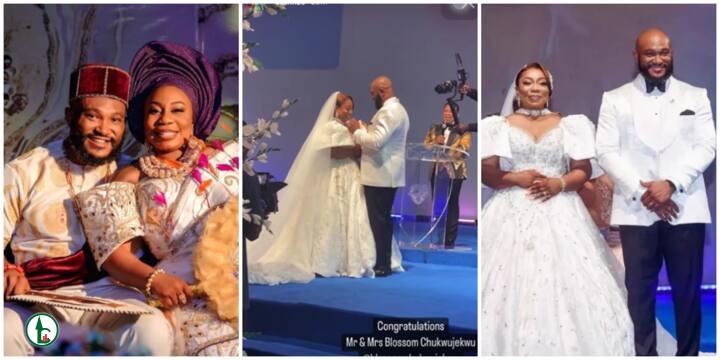 Chukwujekwu was dressed in a white tuxedo while the beautiful bride was spotted wearing the traditional white wedding dress.

Among those in attendance were some celebrity friends of the movie star including Stan Nze and Wole Ojo who were part of the groomsmen.

It would be recalled that the actor and his bride had their traditional wedding ceremony in Benin City in May 2022.

According to several reports, Akhuemokhan is the niece of Oyakhilome.

Chukwujekwu was married to Maureen Esisi. The former celebrity couple tied the knot in 2015.

They left fans and the entertainment industry in shock after their marriage crashed in 2019.

There were speculations that the marriage crashed because Blossom was still romantically linked to his actress ex-girlfriend.

To date Blossom has remained silent as to why his once admired marriage crashed.

However, Maureen, on the other hand, gave some reasons why they are no longer together.