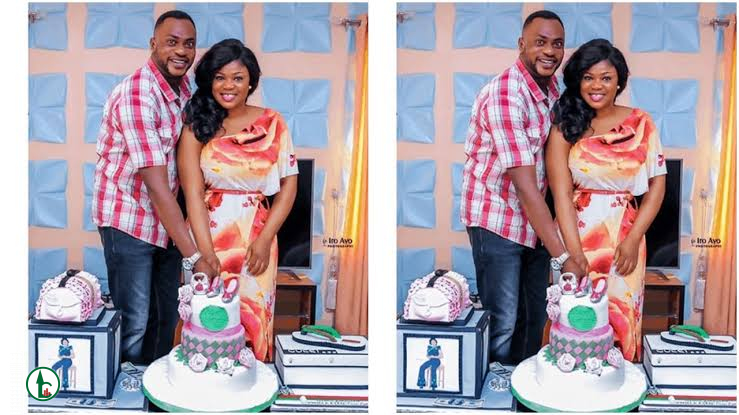 Eniola Ajao is one of the hottest actresses in the movie industry. She’s young, beautiful and talented. And she’s also dynamic and versatile.

With over 75 movies to her credit, the UNILAG graduate of Accounting is still hungry for roles. In this interview, Ajao opens up on her career, relationship, and the reason people think she is dating handsome actor, Odunlade Adekola. Enjoy it.

Tell me about your background

Eniola Ajao is from Epe in Lagos State. My twin sister and I are the last born of the family of six. I wasn’t born with a silver spoon but we are not poor.

So, how are your parents taking your stardom?

They are very proud of me. They know I can never drag their names in the mud. They know what I can do and what I can’t do.
You look so beautiful, what’s the secret of your beauty?

Nothing too serious, it’s just my normal daily beauty routine.
Like what?

I take my bath morning and night. I won’t like to mention any product here but I use the normal (beauty) products you can get in the market.

When did you come into movies?

I joined the movie industry in 2004, but I had to stop for a while after securing admission into University of Lagos to study Accounting. After my graduation I came back fully.

Can you remember the first movie you featured in and the year?

Yes, that was in 2006 and the title of the movie is ‘Igba Aimo’ written and produced by Adesanya Adesina. That was before I joined my boss, Odunlade Adekola.

Your first movie that I watched was Eniola and it’s very interesting. Is it your own movie and is it also a true-life story?

Yes, it’s my own movie, my production but not written by me. Eniola is a true-life story but we just added some little fiction to it.

Is that the only movie you have produced?

No, I am the producer of Daramola and Erin Oni but Eniola is the last one for now. I am someone who takes my time to do things, so don’t worry, another blockbuster would soon come to rule your screen.

How have you been coping working with Odunlade Adekola?

I do call him a genius. He is a total package in this industry. He can sing; he’s a fantastic actor, a great director and producer. Just name it; my boss is a great man. Working with him has really made me to be who I am today, though the best in me is yet to come. I bless God for where I am today in the industry, through him.

Who else do you look up to in the industry aside Odunlade?

Hmmm… there’s this special feeling I have when watching Genevieve Nnaji. She is one amazing person I admire.

Have you met her one on one?

No, not yet, but I look forward to that.

Can you also act in English movies?

Yes, very well. It’s one and the same industry. So, why not?

What is that thing or role you can’t act in movies?

As I earlier said that the best is yet to come, I look forward to more challenging roles.

I’ve watched some of your movies and I noticed that you like to play the role of an armed robber, you like to use the gun and sometimes I wonder if you were actually a trained shooter or someone who is used to pulling the trigger.

Chai! Anyway, I would say the first time that role came was in 2013 and that was in ‘Adebayo Aremu Abere’, and for the fact that I gave it my best, it’s been a referral to other jobs.

I am not married but I am in a very serious relationship.

Hope your man is coping well with your relationship with your boss, Odunlade?

There’s no special relationship between my boss and I than that of an apprentice to a master. We are many (actors) under him and he treats us equally.

I mean your closeness to him, because you are his favourite

No, I am not his favourite. What of Tunde Owokoniran? Is it because he’s a male? If Tunde were a female, maybe people would have gotten that same feeling.

But what about some of your fans out there that feel you guys are dating?

Oh no! We are not dating o, I’m in his group, I’m subjected to him and he just has to make use of me. I hope that’s well stated.

But hope it’s not affecting your relationship with your man?

Never, not at all. My man knows him very well.

How is your man coping with the nature of your career?

And that means the person is not normal.

Okay, do you have a crush in the industry?

That was before I joined the industry.

Have you ever been embarrassed because of your big bust?

My bust? No, maybe because I don’t expose my body. Is it too big? It’s just pumping up (laughter).

Have you experienced any harassment from your male fan?

Yes o, there’s this particular one that was all over me. He was always disturbing me that he wanted to date me and all those stuff. And when I told him I was not interested, he started insulting me; that is it because I’m an actress?

There is this saying that ‘if you’ve got it, flaunt it’, you have all it takes so why do you like covering your body?

I would say it’s my upbringing, it’s not part of me to expose my body, it doesn’t teach morals.

Thank you very much.

At your initial stage in the industry, what’s that major challenge you had?

Initially, I had challenges facing the camera.

What about sex for role from prominent producers?

Not at all, even for once. I am someone who doesn’t force things. I am a goal getter but I try as much as I can, not to push things in order not to be dragged. I was never desperate for fame, so everything just worked together for my good.

What has fame deprived you of?

Nothing really. I buy things I like anywhere. But of recent, I have stopped shopping at Lagos Island market. Anytime I try to do a quiet shopping, I end up rushing back home due to reactions from market people. Like ‘see this actress o, you don’t want to greet us abi?’ Initially, I wasn’t seeing anything in it but the harassment is getting out of hand.

Can marriage stop you from acting?

No, my man understands the nature of my career very well. Not even child bearing can stop me from acting. Not at all, but I know when we get to the bridge, we will cross it.

Is your man in the industry as well?