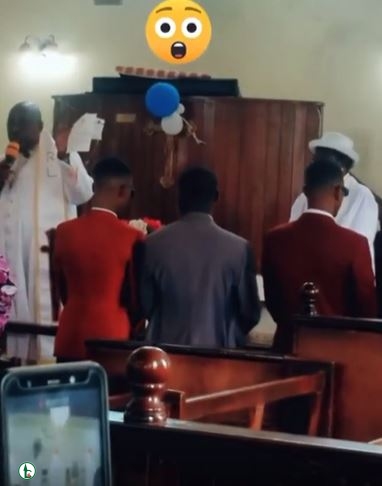 A wedding was called off in Sierra Leone last weekend after it was discovered that the groom was already married.

The young man’s wedding was called off after the family members of his first wife stormed the church with proof that he was already married.

According to reports, the man planned to covertly marry a new wife while still married to his first wife.

However, during the wedding ceremony, as the priest was about to join him with the new woman, family members of his first wife barged into the church with enough evidence to prove that he’d already married.

This revelation made the officiating priest call off the wedding.

He was almost mobbed as an angry mob was waiting outside the church premises to lynch him.

In the viral clip, the man is seen coming out of the church after his wedding was called off, but quickly rushing back after he saw the enraged crowd at the exit.

The incident is said to have occurred in Sierra Leone last weekend.

In other news, a Nigerian Mother has gone viral on social media has become an internet sensation after a video rejoicing over her Tiktok earnings went viral.

In the video, the woman is seen jubilating as she showed off the whooping sum she’d earned in gifts due to her Tiktok activity.

She downplayed the unpopular opinions that the video sharing platform was exclusively for kids and she advised people to jump on the app so they too can also make money off it.