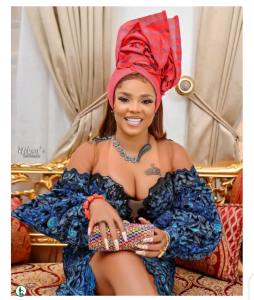 No doubt, Alice Iyabo Ojo is a charmer and she has taken to Instagram to remind everyone by releasing captivating new pictures of herself.

The Nigerian film actress, director, and producer who has featured in over 150 movies, shared the snapshots an hour ago, telling anyone that cared to listen that “beauty rans in the family” and so we should “get use to it.”

“Beauty rans in the family……….get use to it ” she proudly wrote and shared photos….

Recalls Iyabo Ojo had refuted claims of having three hundred to five hundred dollar Net Worth.

Iyabo Ojo, who reacted to the video, debunked the claim.