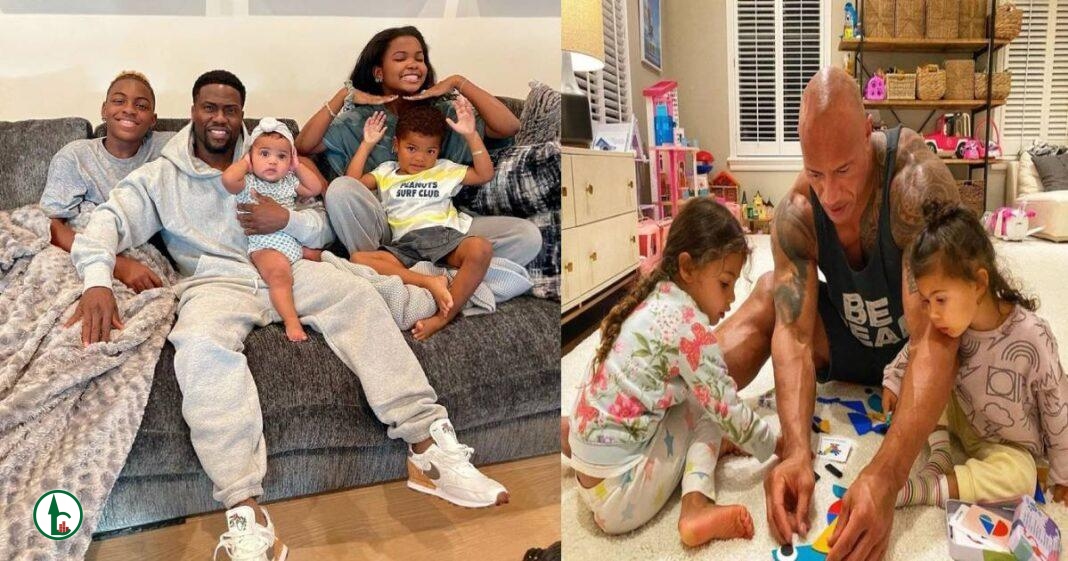 It feels good to be a proud father. Outside a great movie career, most American actors are proud fathers to beautiful kids. Some have up to three or five kids with their wife or love partner. There are popular American movie stars who have lovely kids that you might not know and in this post, I’m going to share with you, some of these movie stars and their kids. (A photo of Vin Diesel and his kids)

The American movie star Vin Diesel is a proud father of three. He had two daughters and a son with his love partner Paloma Jimenez. Van diesel’s had his first daughter Hania Riley in 2008, his son Vincent in 2010 and his last daughter Pauline in 2015. (A photo of Vin Diesel and his daughter Hania Riley) (A photo of Vin Diesel, his wife and 3 kids)

He named his last daughter Pauline to honour his co-star and friend Paul Walker, who died in November 2013. (A photo of Kelvin Hart, his wife and kids)

The popular American actor, comedian, and tv personality Kelvin hart is a proud father of 4. He has two daughters named Heaven Leigh and koris, and two sons named Hendrix and Kenzo Kash. He had his first two kids heaven and Hendrix with his ex-wife Torrei while his last two kids Kaori Mai and Kenzo Kash are from his current wife Eniko hart. (A photo of Kevin Hart and his 4 kids) (A photo of Kevin Hart, his wife and her two kids)

The legendary actor Chris Tucker, has a handsome grown young man named Destin Tucker as his only son. He had Destin with his ex-wife named Azja Pryor. (A photo of Chris Tucker and his son Destin)

Destin is following his steps into the entertainment industry. He has a great resemblance with his father as such, he could pass as his father’s twin at first glance.

Dwayne Johnson who is popularly known as “The Rock”, is a father of three daughters. He had his first daughter Simone with his ex-wife Dany Garcia. (A photo of Dwayne and his daughters Jasmine and Tiana) (A photo of Dwayne and his daughter Tiana) (A photo of Terry crews together with his wife, his stepdaughter and her child, and also his 4 other kids)

The American comic actor and television host, Terry Crew, is a proud father of five. He has a stepdaughter named Naomi, three daughters named Azriel, Tera and Wynfrey, and a son Isaiah. (Terry Crew, his son Isaiah and his daughter Wynfred) (A photo of Terry Crew and his daughters Azriel and Tera)

He had his five kids from his wife Rebecca king which include a stepdaughter. (Jason Momoa and his kids)

The popular Hollywood star Jason Momoa is a proud father of two kids, a daughter named Lola Iolani and a son named Nakoa-Wolf Manakauapo. He had his two kids with his wife Lisa Bonet who is also an actress.

(A photo of Jason Momoa, his wife, mother and his two kids)

These actors have lovely families, what do you think of them?