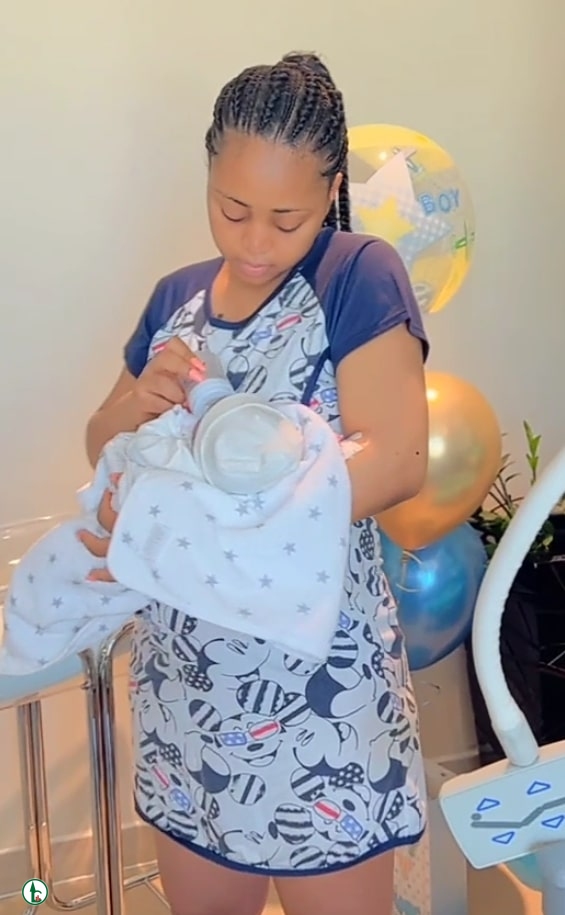 New mum of two, Regina Daniels has given fans a glimpse of her newborn son.

Kemi Filani reported earlier that hours after her husband, Ned Nwoko announced the birth of their second child, Regina Daniels had shared a sweet note to welcome her new son.

The actress noted how June 29th has marked a blessed date for her and her family.

With so much joy in her heart, she announced the birth of her second son who shares the same birth date as her first son, Munir Nwoko.

She noted how Moon and his younger brother are going to be each other’s lifetime companions, partners in crime with an unbreakable bond.

“June 29th is indeed a blessed date for me and my family… With so much joy in my heart. I announce the birth of my second son. Moon and younger brother are definitely gonna be each other’s lifetime companion, partner in crime with an unbreakable bond in Jesus name coupled with the fact that they share the same birth day… I am so blessed. You got your best gift and I’m so happy you get very excited when you see babies”.

In a new update, a video of the Nollywood actress in her hospital bed has emerged online.

The wife of Ned Nwoko was seen face timing her friend as they teased each other.

In another slide of the video, she was seen cradling her baby boy.

recalls Ned Nwoko had announced the birth of their second son on his Instagram page.

According to him, it was a double celebration for the family as his wife welcomed their second child, a baby boy on Moon’s birthday.

He revealed that Regina and the baby were both doing well in Amman, Jordan.

Not forgetting his son, Munir, he wished him a happy birthday as he noted how fast he was growing with so much enthusiasm.

“It’s a double celebration today for the family as Moon turns Two years. He’s growing everyday looking forward to the future with so much enthusiasm. Happy birthday, son. It’s also a delight to announce the arrival of our second son today. Regina and the baby are doing well in Amman Jordan. Uniquely moon and his baby brother now shares same birth date. Our family is over the Moon”.

About SEUN TCV 3564 Articles
I'm Youngz. A professional web designer, graphics, A small guy behind Topcityvibe. Stay update with our Non Stop update.You can connect with my handle below.