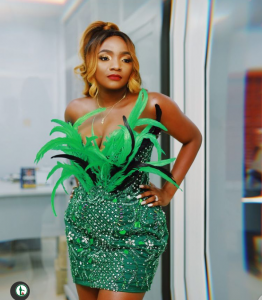 Singer and producer, Simi has got tweeps talking after sharing a photo of herself clad in a flowery gown and captioned with a apple fruit.

The singer who is currently a judge on Nigerian Idol looked smashingly beautiful in the photo but what caught people’s attention was the leafy-like design on her gown. One fan hilariously asked if she has started growing leaves on her chest, another compared her to biblical Eve because of the design. One concluded by saying; “Grass don grow for mummy deja breast”.

The singer didnt however respond to any of their comments….

See photo and reactions that followed

[email protected]
who cultivated flowers on ur cloth?

u don get grow leave for chest…

cheque cheque
AG baby don chop you half u still the post full apple. Green one for that matter. U look good sis.

Bijoy
WAW you are so beautiful and sexy

Duke of the Trenches

Lemme take that flower of you, need to propose asap.

Recalls Adekunle Gold got his wife, Simi teary eyed when he surprisingly showed up on the ongoing Nigerian reality tv show stage with a birthday cake.