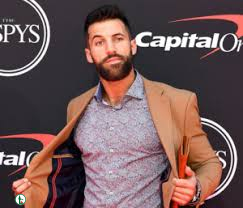 Paul is one of the best players in Lacrosse. He has many records in the game and has won many awards and prizes from various Lacrosse tournaments.

Paul Rabil was married to Kelly Berger for three years. The two of them got married in January 2014; however, they got divorced in 2017.

Following his separation from his ex-wife, Rabil was linked to Mexican actress Eiza Gonzalez. The news of their relationship made headlines in May 2021. Eiza is a well-liked actress and singer who rose to fame with her appearance in the Mexican musical telenovela Lola. In December 2021, the reports of their separation were all over the internet. It is said that their relationship suffered due to their hectic work schedules.

Rabil was born on December 14, 1985, in Gaithersburg, Maryland. He started playing lacrosse at the age of 12. During his college days, he played for Johns Hopkins University.

He attended Watkins Mill High School in Montgomery Village, Maryland, then went on to graduate from DeMatha Catholic High School in Hyattsville, Maryland. He then played collegiate lacrosse at Johns Hopkins University.

Rabil was selected 1st overall by the Boston Cannons in the 2008 Major League Lacrosse Collegiate Draft. That year, he also competed in the MLL-All-Star Game. In 2009, Rabil was named the MLL MVP and MLL Offensive Player of the Year. He had many goals and assists in his lacrosse career.

Rabil and his brother, Mike Rabil, founded the PLL with known investors. He, who was one of the only Lacrosse players at that time to make a living from the sport, campaigned for higher wages, stock, and benefits. During his time in the PLL, Rabil was a midfielder for the Atlas Lacrosse Club and the Cannons Lacrosse Club. he announced his retirement from professional lacrosse in September 2021.