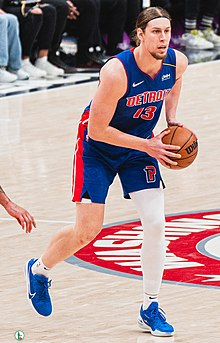 Kelly Tyler Olynyk (/oʊˈlɪnɪk/ oh-LIN-ik; born April 19, 1991) is a Canadian professional basketball player for the Utah Jazz of the National Basketball Association (NBA). He played college basketball for the Gonzaga Bulldogs, where he earned NCAA All-American honors in 2013.

Olynyk was born in Toronto, where he started playing basketball at an early age. He and fellow future NBA player Cory Joseph were both on a Scarborough Blues club team that rarely lost in the late 1990s and early 2000s. One defeat came against rival Toronto 5–0, led by Stephen Curry.] Olynyk moved to Kamloops, British Columbia when he was in grade 7.

Olynyk did not attend a high school or prep school in the United States; he instead stayed home at South Kamloops Secondary School, exposing himself to U.S. competition and coaches while playing on provincial teams – competing at Amateur Athletic Union (AAU) and non-AAU tournaments in the States – and the Canadian junior national team.  Olynyk developed as a point guard, continuing to play the position even after growing from 6’3″ (1.90 m) to 6’10” (2.08 m) in grade 11. Olynyk was heavily recruited out of high school by the likes of Syracuse, Providence and North Carolina State. He chose Gonzaga in part so he could play closer to home.

Olynyk was named the Basketball BC outstanding high school player of the year in his grade 12 year, leading his South Kamloops Titans to a 36–2 record and a third-place finish at the BC AAA High School Boys’ Basketball Championships.

Olynyk was also a quarterback for the Titans when he was in high school and broke his arm during a playoff game in 2007.