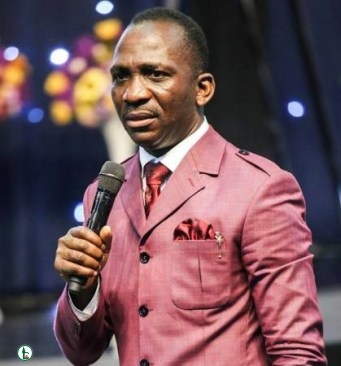 Popular Nigerian clergyman, Pastor Enenche, has averred that one of the most challenging types of relationships is where the woman is ahead of the man.

The preacher who made this assertion during a sermon in his church noted that a relationship where the woman is more successful hurts the man’s ego.

According to him, men are wired such that they have an ego, and such men may begin to exact their authority and try to fill the difference and vacuum with harassment and oppression to show they’re the man.

He added that for a peaceful home and a successful marriage, men should marry women “that they are in front of”.

“One of the most challenging relationship types I have seen is where the woman is ahead of the man, whether academically, mentally, financially, position wise. Its very challenging because in every way, men are meant to be ahead. Men are wired such that they have an ego inside them, when you get married, he begins to exact his authority physically, he begins to look for how to fill the vacuum and the difference by harassments by oppression to show you he’s the man. His inadequacy and deficiency, he’s beginning to release it in other ways and make life unbearable for you”. He said.

Speaking further, the man of God stated that husbands that wait for their wives to pay house rent, children’s school fees, and buy foodstuffs should pull their trousers and wear skirts.

He opined that its an abomination for a woman to carry the burden of the home.

“One of the worst things I have seen is when a man is waiting for his wife to pay house rent, waiting for a woman to pay children’s school fees, to buy food in the house. You are no longer a man then. Pull your trouser and wear skirt. Wear dress, wear gown. I cannot ask my wife where is your contribution to food money. I can’t.. Children school fees what are you bringing…Not now. Before pastoring.”