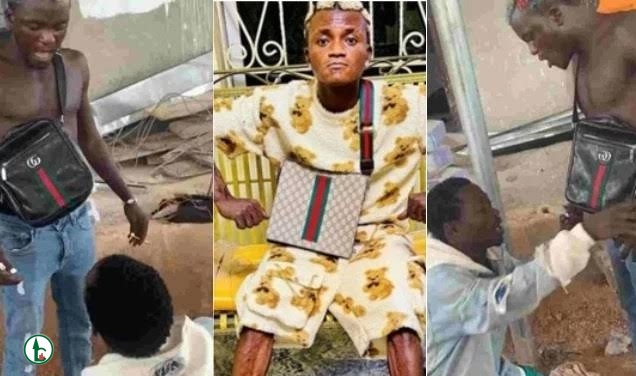 Controversial Nigerian singer, Portable and his old-time pal, DJ Chicken got social media buzzing for the upteenth time when a new video of them emerged online.

In recent months, The Duo had a bittersweet encounter with each other over their past work relationship.

Recall that DJ Chicken released some videos weeks ago where he claimed that Portable abandoned him after rising to fame and he went ahead to mock the singer for not being able to speak English properly.

The Zazuu hitmaker fired back by accusing his old friend of being an ingrate, adding that the DJ also betrayed him.

However, weeks after the incident, a video that made the rounds showed Portable berating the DJ before forgiving him and welcoming him to Zeh Nation.

Recently, another video of Portable and DJ Chicken has sparked reactions on social media.

The singer busted DJ Chicken and slammed him for interfering and acting like his manager.

Portable recounted how DJ Chicken demanded money from some show promoters before releasing his contact and he still took him to the said show in Ekiti.

The street artiste further stated that when the show promoters saw him at the event, they got angry and almost killed him, he was the one who came to his rescue.

Despite everything the Zazzoo crooner claimed to have done for DJ Chicken, he still allegedly went further to portray his name and business in a bad light.

DJ Chicken was seen kneeling and begging the singer in the video as his boys descended on him.