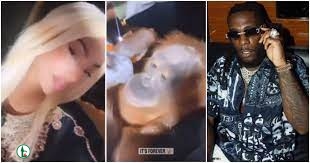 The British rapper was spotted on stage with Jamaican dancehall and Reggae rapper, Sean Paul, dancing and whining

Stefflon made sure to rock Sean Paul with her big backside, and the video has caused a buzz after it trended online

Top Nigerian singer, Burna Boy, and his former relationship with British rapper, Stefflon Don, have continued to cause a buzz online.

A number of internet users started to talk about the couple again after a video went viral of Stefflon Don with Jamaican rapper, Sean Paul, on stage.

In the viral clip, Stefflon, who was dressed in a one-piece, was seen whining and rocking the Jamaican star with her big backside.

The female rapper made sure to bend down low as she rocked the rapper while performing on stage, and the video has turned many heads.

See the clip below:

It didn’t take long for the video to go viral on social media and it caused quite a buzz among Nigerians who had a lot to say about it.

A number of people talked about Stefflon’s ex-boo, Burna Boy, and how the video might hurt his feelings. Read some of their comments below:

“Odogwu go feel this one.”

“On behalf of my guy odogwu, I need Igbo and shayo.”

“Since burna break her heart, she nor dey wear clothes again.”

“One thing with ex’s is once you don leave them na that time Dem go come get big nyash and bwees come look more attractive.”

“Dis girl is out for odogwu.”

“Odogwu no go fit sleep well this night me sef I go choke if I see this.”

“Paul nor believe wetin he dey see so.”

“Someone should check on Odogwu.”