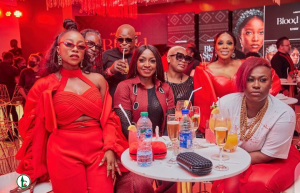 The new movie which did not only capture the local audience but also the international viewers was released yesterday, Thursday, 5th. And just few hours after its launch, the movie began to trend globally with various reactions.

Mo Abudu who produced the highly rated crime thriller took to her handle to share a screenshot of how her movie is trending on Twitter, revealing that they set out to make a ‘local show for a global audience and they are beginning to see this become a reality just one day after launch.

We set out to make a LOCAL show for a GLOBAL audience and we are beginning to see this become a reality just one day after launch …What more can I say, #BloodSistersNetflix was spotted trending on Twitter in London Simply awesome”

As if people were waiting for her to drop a post about the movie, many fans, celebrities and well wishers stormed her page to react and share their opinions about the movie…

n4wk47
Indeed, it worth the wait… The storyline was sick and it was complex and unpredictable…. That was a fuckin masterpiece ma…. All the cast were blast @moabudu Damn!!! That was sick AF

eunice_braimah
Watched it yesterday night after work and l stayed glued from start to finish. The suspense, intrigue, excitement is one to be remembered. The story plot, the sound effects, the props, the settings, the originality ( l could go on and on) was super. For once the gunshots sounded real

the fights, the blows, the slaps etc. Welldone @moabudu , this is indeed a masterpiece. So proud this is coming from a Nigerian. Welldone ma’am

yemisiakinbobola
Stayed up till 0330 watching this last night. Best thing on Netflix right now. Great work by the cast, crew and @moabudu

vsp_botanics
The story, the acting, locations were all

You all killed it..loved every bit

gen0vevaumeh
Blood Sisters to the Worl

i_am__queens
The movie was amazing

chi.di.nma
Just finished it and it was awesome great work

ronsuccess
I love ittttt you guys killed it !!!! Kemi and Serah infect the whole cast and crew did too great !!!! Like too too great !!!!!!Flooding you guys comment session

nihinlola_miwa
Absolutely worth the hype

The seasoned thespian is trending on Twitter because of her impressive role in a Netflix limited series, Blood sisters.

Kehinde Bankole embodied the character of Olayinka in the movie giving us such a remarkable acting skill especially in her sex scenes.

Taking advantage of the twitter trends, the actress shared some new photos as she asked her fans if they will love to meet her double….

. Una too like…u know…lol. anyways do you want to meet my double soon?” She asked.