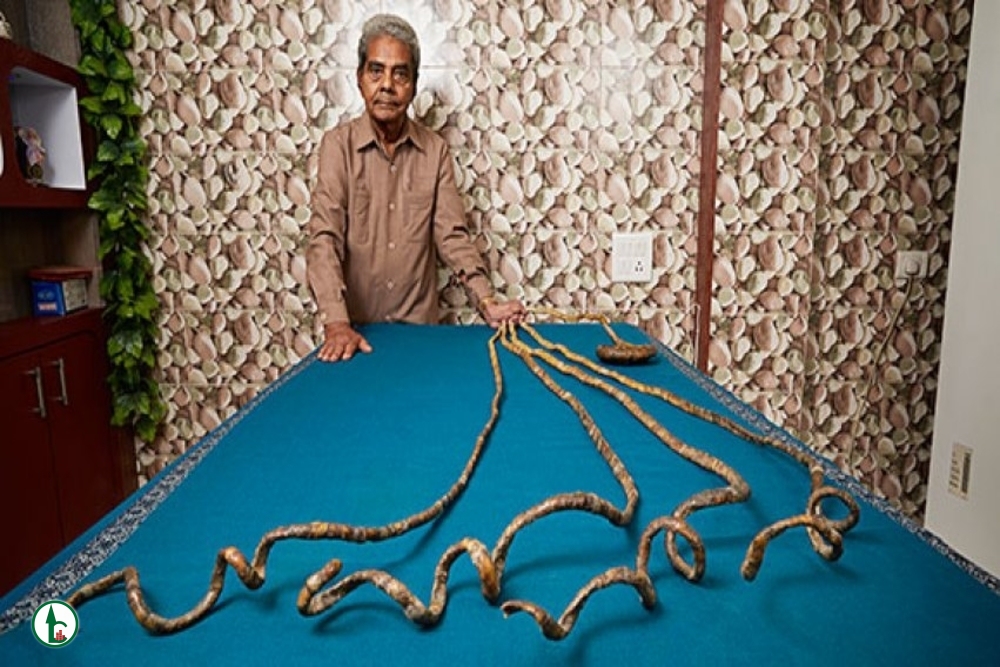 Shridhar Chillal, an octogenarian from India, finally cut his nails after 66 years but his record of having the world’s longest fingernails measuring over 31 feet has left his hand permanently handicapped.

Chillal, 82, was flown in from India by the Ripley’s Believe It or Not! museum in Times Square for a special event during which his fingernails were cut.

The fingernails have been acquired by Ripley’s, which will display them at the museum here. His cut fingernails are laid flat in a memorial case and span a length of over 31 feet, the height of a three-story building, according to a statement by Ripley’s.

Chillal had not cut his nails on his left hand since 1952. He had decided to grow his nails when he was scolded by his school teacher as a result of accidentally breaking the teacher’s long nail. The teacher said that Chillal would never understand the importance of what he had done because Chillal had never committed to anything.

“I took it as a challenge,” said Chillal, and there was no looking back.

He only grew the nails on his left hand. His right hand’s nails are trimmed. Due to years of growing his nails and the weight of the nails, his hand is permanently handicapped. He cannot open his hand from a closed position or flex his fingers, the statement said.

Ripley’s said it was privileged to display the “unique and one-of-a-kind” exhibit. “Chillal dedicated his life to something truly remarkable and Ripley’s is the perfect home to honour his legacy. While he may have cut his fingernails, his nails will be forever memorialized inside Ripley’s Believe It or Not! Times Square,” Ripley’s Believe It or Not! PR Manager Suzanne Smagala-Potts said in the statement.

Chillal’s unusual choice didn’t stop him from leading a normal life with his wife, two children and grandchildren. However, as he aged, his long nails were proving more challenging to maintain an ordinary lifestyle. He found it difficult to sleep, and even a gust of wind was cause for alarm.

The Ripley’s Believe It or Not! Times Square museum features 20 galleries and more than 500 artifacts from around the world.