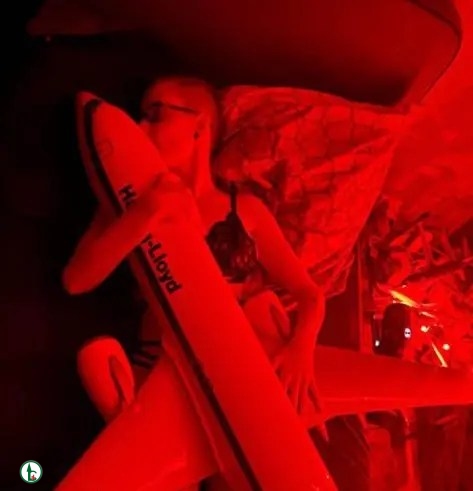 A young woman who is s.e.xually attracted to objects has revealed that she’s dating a plane. Sarah Rodo (23) is a “objectum s.e.xual” which means she has a s.e.xual attraction to inanimate objects.

She claims to be in love with the passenger plane, which she now refers to as her boyfriend.

The woman from Dortmund, Germany said she has tried human relationships but claims that the aircraft makes her feel whole.

According to The Mirror, she even has 50 replica models that sleep in her bed, and she gets physical with them.

She’s so in love that she regularly travels by plane so she can remain close to her partner.

Sarah enjoys plane spotting in her spare time, has two tattoos of her lover on her arm, and even fantasizes about marrying the Boeing 737 named “Dicki”.

In her home country, however, such a marriage ceremony would be considered illegal.

In other news – Connie Ferguson’s R5 million car leaves Mzansi speechless – WATCH
Mzansi actress and producer Constance Connie Ferguson is one of the country’s most decorated stars. She was born on June 10, 1970. She is popular for playing Karabo Moroka in South Africa’s most popular soapie Generations between 1994 and 2010.

She returned to the show in 2014 when they were rebranding to Generations: The Legacy. Connie Ferguson (the Masilo) married fellow actor Neo Matsunyane in 1993. Whom she shares a daughter. They divorced in 1998, after five years of marriage.