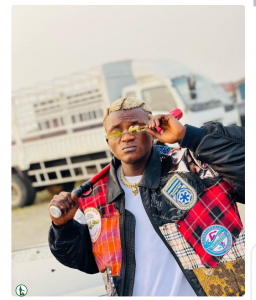 Fast-rising music star, Portable Omolalomi has recently stirred massive reactions on social media after he shared a brief video clip of himself showing off large sum of money he made from his recent shows abroad.

He said, “Don’t you know I am expensive. Expensive OG. I am a hero. I am a superstar. I am proud of my money, it is legit money not made from scamming others. I am proud to post my money ”

Ever since Portable broke Into the mainstream with his hit track, Zazzoo featuring Olamide and Poco Lee, he had become unstoppable. He had grown to be one of Nigeria’s most popular upcoming street artists in the country.

Not only is his popularity growing massively, he has not relented in consistently dropping good music for his fans. Within six months of being in the spotlight, he has dropped over 15 tracks and has been featured in over 20 songs.