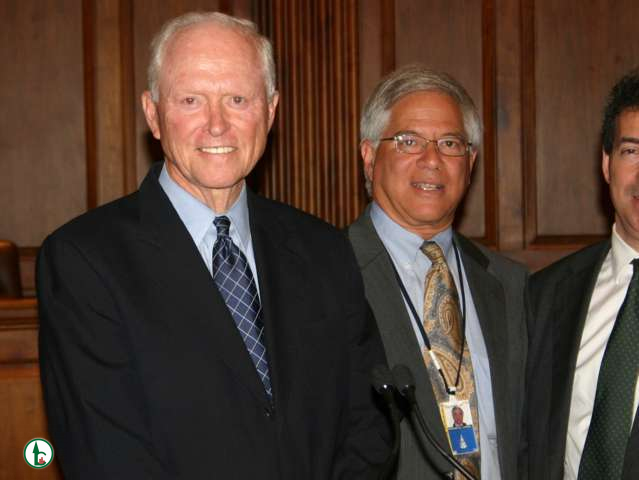 In the Carter administration, from 1979 to 1981, Benjamin Civiletti, an American attorney, served as the country’s top law enforcement official.

Benjamin Civiletti, a former US attorney general, passes away at 87.

Civiletti, one of the most expensive private attorneys in the country who probed President Jimmy Carter’s brother while serving in the administration, has passed away. He was 87.

According to The Baltimore Sun, Civiletti passed away from Parkinson’s in his Lutherville, Maryland, home on Sunday night.

Attorney General Merrick Garland, who joined Civiletti at the Justice Department in 1979, praised his former boss’s “skill, integrity, and dedication” in a statement on Monday night.

“I would describe myself as a hardworking lawyer with good judgment who gets things done,” Civiletti told the Baltimore Sun not long after he became, in 2005, the nation’s first lawyer to charge $1,000 an hour.”

In March 1977, Civiletti left his illustrious career as a lawyer in Baltimore to work for the Justice Department as the assistant attorney general in charge of the criminal division. Carter appointed him as Griffin B. Bell’s replacement as attorney general in July 1979 after appointing him as Bell’s deputy in May 1978.

As a result of Billy Carter accepting $220,000 from Libya but failing to register as a Libyan agent, the Justice Department and the Senate launched investigations. Carter registered as a Libyan agent in accordance with a settlement reached after the department filed a lawsuit.

By briefly raising the issue with the president, the Justice Department’s Office of Professional Responsibility looked into whether Civiletti had broken any laws or regulations. It later concluded that he had not, but a Senate subcommittee found that he had not acted in a professional manner.

Tim Kraft and Hamilton Jordan were accused of wrongdoing, and Civiletti, the attorney general, was the first to request the appointment of a special prosecutor under the 1978 Ethics in Government Act. Later, he claimed that the act had a too-low bar, wasted money, and unfairly tarnished Kraft and Jordan’s reputations despite the fact that none of them was ever charged.

Civiletti left his position as chair of the 470-attorney Venable LLP in May 2006; the company had $239 million in yearly revenue at the time. He continued to be a director of the company and to work as a corporate investigations lawyer.

On July 17, 1935, Benjamin Richard Civiletti was born in Peekskill, New York. Johns Hopkins University awarded him a psychology bachelor’s degree in 1957, and the University of Maryland School of Law granted him a law degree in 1961.

On July 17, 1935, Civiletti was born in Peekskill, New York. His mother was Virginia, and his father, Benjamin, was a manager of a grocery store (Muller).

He was 87 years old. Civiletti was raised close by in Lake Mahopac and Shrub Oak and went to Tarrytown’s Washington Irving High School.

Benjamin Civiletti Career, What was his Profession?

Civiletti worked as W’s law assistant. Judge Calvin Chesnut of the U.S. District of Maryland’s district court. One year after finishing law school, he started working as an Assistant United States Attorney in Baltimore, where he remained until 1964.

Griffin Bell had heard of Civiletti through his trusted advisor, Charles Kirbo, a lawyer with whom Bell had once worked on a case. In February 1977, Carter nominated Civiletti to succeed Richard Thornburgh as the United States Assistant Attorney General in charge of the Criminal Division. At the time, Bell was assembling the Justice Department leadership team for the presidency of Jimmy Carter. He was proposed as the Deputy Attorney General in 1978.

Civiletti was born and raised in the nearby communities of Lake Mahopac and Shrub Oak, and he attended Tarrytown’s Washington Irving High School before earning an A.B. there and graduating. in 1957 in psychology. He graduated from the University of Maryland School of Law in Baltimore, Maryland, four years later with a Bachelor of Law.

Benjamin Civiletti Net Worth, How much does he earn?

Benjamin Civiletti is a well-known and well-known American lawyer who has a $300,000 total net worth.

Benjamin Civiletti Wife, What is his relationship?

We did a quick search for the social media reach of Benjamin Civiletti but weren’t able to find him on any social media platforms.

Interesting facts about Benjamin Civiletti’s which should be known

About SEUN TCV 3421 Articles
I'm Youngz. A professional web designer, graphics, A small guy behind Topcityvibe. Stay update with our Non Stop update.You can connect with my handle below.