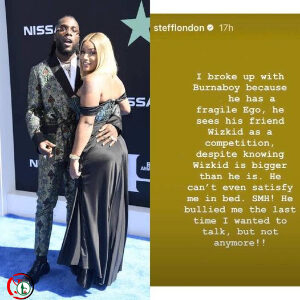 She says it’s because of his fragile Ego and his performance in bed.

She also said that Burna sees Wizkid as a competitor.

You recall, Burna had reportedly ended things with his lover and British-Jamaican artiste, Stefflon Don, whom he dated for some time. The ‘Last Last’ crooner took to Instagram in the latter part of 2021 to make a cryptic post insinuating that he was single. He wrote, ‘and for your information, Odogwu does not have a wife’.

Also, I think she wants to cause trouble between Wizkid and Burna Boy.

What’s your take on this guys.